PS: If you do not like Arashi or think Ohmiya is just a fidgement of imagination, then this is probably not the right place for you :p
For information about me or this LJ, kindly see my profile. Enjoy your stay and rainbow sparkles for everyone!

...and although this place is slowly dying, it'll always be where I cultivated my Arashi addiction.

I remember when LJ was brimming with fangirls (and probably also boys), new communities popping up every other day... and I'll never forget all the incredible people I met here (mostly awesome, wonderful people, but also some that were clearly nuts ¯\_(ツ)_/¯). I learned and experienced so much thanks to LJ which is one reason why I have a hard time moving on (also other SNS are more prone to spoilers and I'm a bit lazy these days).

Anyway, thanks to all the great fans that made this a special place! And of course thanks to the best fivesome ever 💚💜💙💛❤

And now, let's go on to the next ten years!

...twenty-four little hours
Brought the sun and the flowers
Where there used to be rain

My yesterday was blue, dear
Today I'm a part of you, dear
My lonely nights are through, dear
Since you said you were mine

Lord, what a difference a day makes
There's a rainbow before me
Skies above can't be stormy
Since that moment of bliss, that thrilling kiss

Arashi has killed me. This time with their YouTube Livestream. But I'm proud to have been one of over 770.000 viewers, even if I had to get up in the middle of the night (03:00). Now I have to consider setting up some SNS accounts for I have none of the services Arashi graces with their presence. 😋

Arashi, what about your " and more"? 2 years are hardly more. Even if at one point I might understand your reasons, even if I know this isn't the end of the world, right now, I'm just beyond sad and confused and angry and so many other emotions.

Arashi, how dare you!
Breaking your fans hearts like this.

Edit: An hour late I'm still trying to process this, but the rational part of my brain apparently went on hiatus, because there're only emotions raging inside of me. I know that I will love them for sticking to their motto "Arashi is only Arashi when it's the 5 of us", but right now... I'm not at that point yet.

I tried reading their messages and with every additional word my heart shattered a bit more. I'm thinking back to the last one a half years and probably overthink a lot of stuff and try to analyse their behaviour and come to the conclusion that nothing could've prepared me for this.

Arashi has been an important part of my life these past years and they've helped me overcome so many obstacles. I know that all good things must come to an end, but I hoped that in case of Arashi it never would.

Edit 2: So a couple more hours have passed. I still haven't been able to bring myself to watch the JFC video, but I've read some more about it and somehow I read Aiba's part and there was suddenly hope. I'm going to be clinging to that.

At the same time I have been thinking, probably overthinking, about stuff I noticed the last year which has bothered me.

First of all, there was something decidedly off about Ohmiya for quite a while. Recently they acted like before, but for a while they seemed a bit more distanced than what a shipper like me was used to. Also, Aiba has been placed so often between them, it seriously bothered me. I put it down to their agency and sponsors trying to beat down all Ohmiya-ness, but now I'm no longer sure.

Then the lack of a new album. It seemed weird, but I thought what with their tour and anniversary they were planning something big. Who knows whether they just couldn't get the inspiration or motivation amongst their talks.

I also noticed that Ohno looked older (well, duh! ) than ever, he really aged this year. Well, it can't have been an easy year for him.

I'm often checking JWeb for new projects and so on and couldn't help noticing the lack thereof this month, but even before that as well. I put it down to them being busy with the tour and planning lots of stuff for the actual anniversary. They've probably been busy with other stuff.

I've also remembered other JE groups and how it was for them to lose members (namely KAT-TUN and Kanjani). Theykept going, but although I'm sad to see Arashi end (or stop), I'm glad they're not working as a 4 person group because that would never be Arashi. Ohno is irreplaceable and I'm impressed they'd rather stop than pretend otherwise.

If this it hard for us, then it is even harder for them.

I cling to the hope that he will find that what he was looking for was there all the time. I'll surely be waiting for you. And I hope he'll finally be able to become (secret) official with his Nino, because no matter what - you don't share looks like they did with your best friend but with the one you love.
💜❤💚💛💙

I noticed something cute about  Arashi at this year's FNS (and the promo for it): Nino and Ohno are always looking at each other 💛💙
Need proof? Here you are! 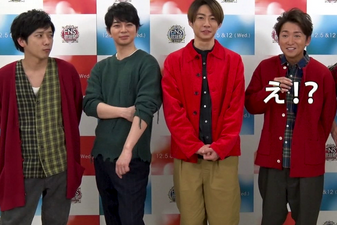 I love them sharing looks (and occasionaly getting lost in their own little world). 😍 They just know how to make my day~~ What about you?

I feel like Photobucket is mocking me. First they ban all third-party hosting (or extortiate charge $400 for that "pleasure"), so I spend ages to re-upload all images and changing my entries and now the images are apparently back 😲 I guess no one was stupid enough to pay that much, but they need some customers in the end... Well, I'm not going to complain (but neither am I trusting them...)

Two or three days back Photobucket (finally) came round to replace my uploaded images with the nice advice to upgrade my account. I liked their service, but I'm sure I'm not the only one who thinks $399 a year is even beyond extortion.
I'm in the process of downloading all my images (and I never realized it were that many), so I can update my entries again. But since Photobucket is so slow on getting the downloads ready and won't include gifs, it's pretty much useless. *sigh* And JDownloader is bitchy with gifs as well and sometimes doesn't include all images in a folder, so I have to manually check which one is missing...
Until I'm finished, please bear with the non-existence of the majority of my pic-spams. I've no idea when I can fix them, since I'm still looking into other services (I tried GDrive and can only say that I'm too dumb for them). Does anyone have any tipps?

I'm sure almost everyone has by now heard (or read) about LJ's new TOS and the concerns about them. (If not, you can read the announcement here and the new TOS here, for a breakdown of the various concerns you can simply google LJ TOS.)

I read the English version and was and still mostly am of the opinion that they are more or less like the terms of any other social media side. I have no idea about Russian law though and am also concerned about previous mass deletions/suspensions here on LJ (for more info go here).

I hope we're all just overreacting. Personally I think that you only might face deletion if you post something truly radical (e.g. glorifying terror or spreading radical hate). I should think that Russia has many much more pressing issues than checking every single entry of every single journal/community especially since there is such a wide variety of languages around here.

Nevertheless, by now I am seriously torn about what I should do. The more I read, the more I feel the paranoia. I created a Dreamwidth account years ago, that I never really used (

cleotine). I imported my LJ a few weeks back (and am thankful for that atm), so if you want to add me to your circle over there, feel free to do so (just drop a comment, tell me your LJ/DW username or how we know each other). For the time being however, I have all my entries set to private, since I sincerely hope that our fears won't come true and things will go on as before. If the worst should happen, I'll open them to public and might migrate there full time. But I'm planning to stay here as long as possible.

I have spent so much time and love here and I'd be heartbroken if I ever lost my journal. No archived version could ever replace all my memories here that span over almost seven years. I don't want to lose this place, the wonderful people I met and the dedicated members of so many wonderful communities. When MU was taken down so many years ago, the blow was hard as well, but fandom managed to survive. If push comes to shove, I hope we'll be able to do the same once more and start anew. But if I have any say in this, I hope this is one of those things that never change.😑


[Edit/Addendum]Edit/Addendum: I'm not that worried about our data going through Russian servers, because I don't think they can be worse than the NSA (or other secret services). Yes, the new TOS might make life harder for Russian people who try to voice out their opposition to the current government; it's not like I'm not aware about that. But to be fair, I have a weibo account and not really a clue what their TOS are. As far as un-free speech goes, it's not that easy to beat China and until now I never had any trouble (but I also never tried spelling Democracy there...😶).